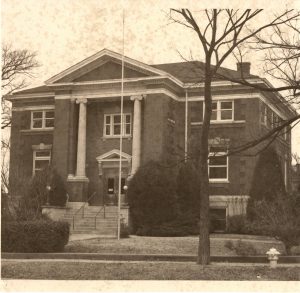 In 1882 the population of Independence Kansas had reached a whopping 2300, so a local government began to form, a school board was organized, and The Ladies Library Association was founded.

The main objective of The Ladies Library Association was to obtain books to open a library. The Association dues were $1.20 per year, which was not enough to begin building a book collection, so they organized numerous fund-raising events such as musical programs, socials, lectures, carnivals, and plays. An interesting side note was that they were criticized terribly when the dresses in the production of ‘Milk Maids Convention’ were a disgraceful twelve inches off the floor! How times have changed!

The Ladies Library Association purchased their first 94 books for $94.25 and opened the collection to the public from the City Council room in City Hall on Dec. 1, 1882. This was a humble beginning with a bookcase and four dozen chairs. Additional books were added as supportive Independence citizens made book and cash donations. 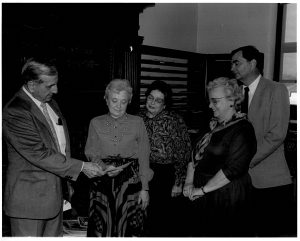 In 1883 the collection was moved to a store that charged monthly rent of $1.25. Another $100.00 was then used to add to their book collection. Space was donated, so they moved in 1884 inside a store on Penn Ave. called Ebersole & Foster. Then in 1887 the collection was moved into the home of Mr. Stich. They were open to the public only on Wednesdays and Saturdays from 2:00 – 5:00 PM. They moved again in 1896 into a room they rented for eight years.

November 18, 1907 was the grand opening of the beautiful new Carnegie Independence Public Library. At the opening there were two members of The Ladies Library Association who attended the first meeting in 1882!

The library was remodeled and enlarged in 1925. The children’s collection had reached 3500 books, which was the number of the entire library collection in 1907. Independence had the most complete children’s library in the state!

We can be thankful to the people of Independence, past and present, for their contributions to help make our library what it is today. “…the public library stands a monument to the untiring efforts of the pioneer women of this city…” Daily Reporter of August 8, 1925. 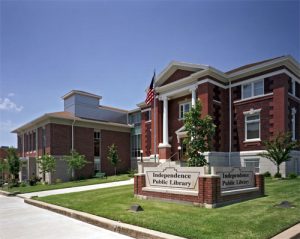 The 9,600 square foot Carnegie building received a complete overhaul after nearly 100 years of service. The elevator was removed from the Carnegie building so that the elegant spaces could be restored to their former grandeur. There is a positive engagement of the Carnegie building with the uses it is now put to: it houses the Kansas Room, Board Room, Conference Room, a major portion of the Children’s Library, and on the lower level it houses staff work spaces and storage.

The new Conference Room is located on what was the main floor of the Carnegie building and was formerly used for our non fiction collection. With the removal of the steel shelving and some rearrangement of the space, the room has become a wonderful meeting space with a kitchen and a versatile type of furniture that will provide comfort for audiences, discussion groups, or seminar groups.
Where the Circulation Desk was formerly located there is now a Gallery and regular exhibits will be displayed.

Perhaps the most interesting space of all is our Children’s Library and YA Space located on the entire 3rd floor. The colorful space has a parent’s lounge but otherwise is built for youth from the scale of the furniture to their own gallery along the entrance wall. Children’s and YA have grown from 1,800 sq. ft. to 5,500 sq. ft. which is the largest percentage growth of all library areas.

All in all the public areas of the library have grown a whopping 308%.

The Independence Public Library was featured on an episode of PBS Sunflower Journeys. 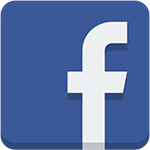 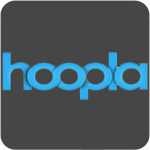 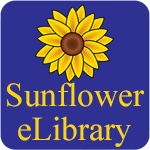 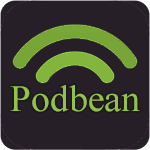 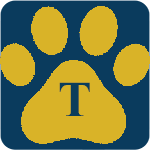 Back To Top
Search